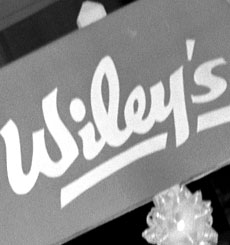 The Wiley Building is significant for its association with early commerce in Hutchinson, the agricultural and trade center of SW Kansas. In 1912, dry goods merchant Vernon Wiley announced plans to raze the 3-story opera house on the NE corner of First and Main and replace it with an 8-story concrete and steel skyscraper, twice the height of any other building in downtown Hutchinson. Besides the department store, the Wiley Building housed more than 90 office suites, including the Commercial Club and Hutchinson Board of Trade, along with a popular tea room on the mezzanine level.

1930-1931
Fox Theatre was built by the Wiley Investment Company

Quarter million dollar expansion, two floors added to Fox Theatre with access to the bridge over the alley. Interior remodeled with new fixtures, and new entrance built on west and south (may be installation of revolving doors)